In my career studying energy, I have never been more scared of a government policy than I am of the Federal Government's push for a "CES"--"Clean Energy Standard" that would dictatorially mandate 80% "clean," including 50+% unreliable solar and wind, electricity, by 2030.

Thanks to government mandates and subsidies, solar and wind--"unreliables"--provide about 10% of American electricity. This 10% has already caused big electricity price increases and huge reliability problems. Politicians should admit their failure, apologize, and reverse course.1

Instead of admitting that the US's 10% solar+wind electricity is causing huge cost and reliability problems, our government, led by Senator Tina Smith, is quintupling down on this disaster by pushing a "Clean Energy Standard" that would require minimum 50% solar+wind in 8 years!!

A CES would mandate 80% "clean electricity” by 2030--but does nothing substantial to reverse the criminalization and defunding of nuclear. So nuclear will decrease from its 20% share today. Hydro, at <7% today, has little room for growth. That means >50% solar/wind!2

Consider: Germans, to get 37% of their electricity from wind/solar, have doubled their prices--now 3X US prices. And they can only get away with 37% because they have neighbors to bail them out when solar/wind fall short. The US as a whole has no such neighbors.3

Contrary to media denial, government favoritism for solar and especially for wind were absolutely to blame for the Texas blackouts. TX defunded reliable power plant construction as well as resiliency measures (like weatherization) to pay for solar/wind.5

During TX's February cold spell, wind and solar disappeared when they were needed the most. Its expensive batteries, which could store a mere 40 seconds, didn’t help, either. What would they have done under the CES's 50% solar and wind??!!6 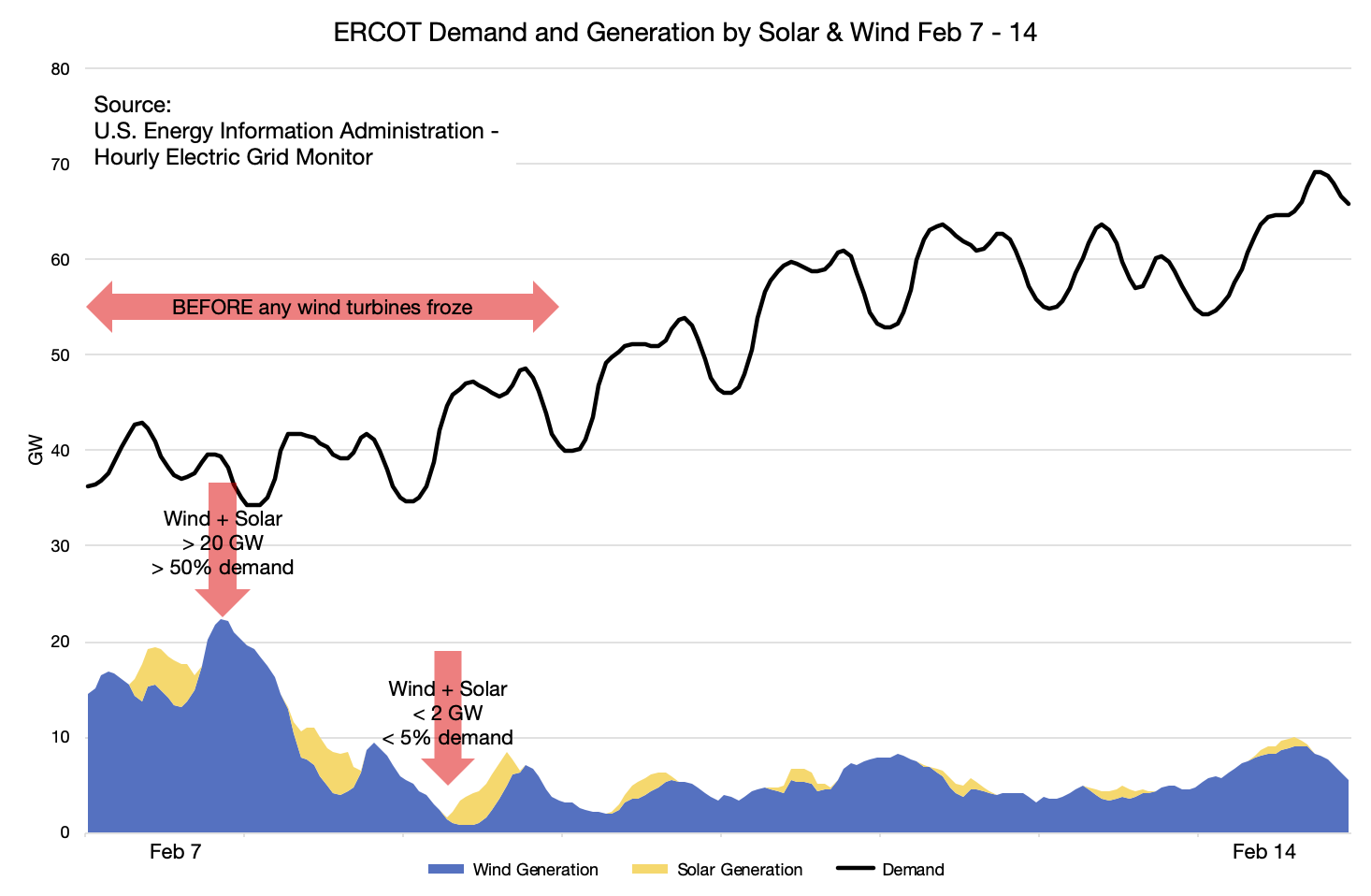 The facts are clear. 10% solar and wind in the US is disastrous. 50+% solar and wind would guarantee unaffordable prices, constant shortages, frequent blackouts--and the fleeing of industry and jobs, once companies realized the US no longer had low-cost, reliable electricity.

Historically, the Constitution protected us from terrible ideas like the CES--which would more accurately stand for Crackpot Energy Scheme. It was recognized that the Federal Government cannot dictate the electricity choices of all Americans.

Ominously, today the Constitution is so ignored that government and media consider it totally okay to grant the Federal Government dictatorial control over all electricity as part of a budget reconciliation process. What country are we living in?

China's electricity grid is overwhelmingly low-cost, reliable coal--a major reason why China generates 5 times more industrial electricity than we do. In 2020 China added 38 GW of coal plants and has 247 GW (enough to power 3 Texases) in development. All designed to last 40+ yrs.8

The claim that a "Clean Energy Standard" will lower global CO2 emissions is a joke. As China illustrates, the world, especially the developing world, will overwhelmingly use fossil fuels because that is by far the lowest-cost way for them to get reliable energy.9

Anyone who cares about CO2 emissions must recognize that the only non-carbon energy source that has a chance of outcompeting fossil fuels and lowering global emissions is nuclear energy. Nuclear is incredibly safe, incredibly reliable, and can be generated anywhere in the world.

Unfortunately, nuclear has become ultra-expensive in the US because politicians (mostly Dems) have demonized it and virtually criminalized it through endless unscientific regulations--along with wind/solar favors+subsidies, like the "PTC," that defund reliable nuclear plants.[10]

US policy is so anti-nuclear that virtually no one will attempt to build a nuclear plant in this country--and in 2021 utilities are planning to shut down a record amount of our existing low-carbon, low-cost, reliable nuclear power plants!11

Any policy serious about CO2 emissions needs to recognize the severe deficiencies of wind/solar and make nuclear decriminalization priorities number 1, 2, and 3. Instead, our government wants to dictate catastrophic amounts of wind and solar using the "CES".

The proper path forward for America is to fix our broken electricity system by ending all mandates and subsidies for unreliable solar and wind, liberating nuclear energy, and making sure to have enough low-cost, reliable power plants to handle every situation.

When we look at the decline of nations throughout history we wonder: How could they not have seen it coming? Today, we should clearly see it coming that a CES, destroying our grid with catastrophic amounts of unreliable solar+wind, produced by China, will mean our decline.

Next up: Biden’s executive order on EVs →